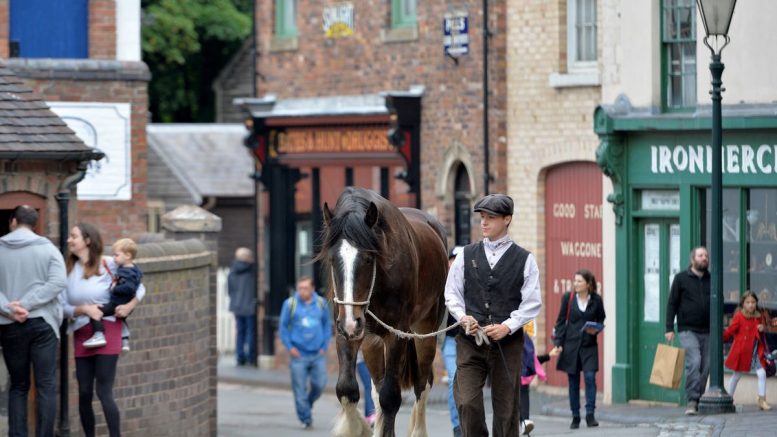 The £1,064,348 windfall from the Government’s Cultural Development Fund aims to give people access to arts and culture in areas with historically low levels of cultural engagement and boost economic growth.

Almost £7 million has been given across the West Midlands region in funding which is broken down into three pots of cash: the Cultural Development Fund, the Museum Estate and Development Fund and the Libraries Improvement Fund.

Nick Ralls, CEO of the Ironbridge Gorge Museum Trust, said he was delighted to receive the cash, adding: “The grant will enable us to carry out vital infrastructure and urgent maintenance work at Blists Hill Victorian Town, helping preserve and protect our designated collections for future generations to enjoy.”

Attracting about 190,000 visitors annually pre-Covid, the award-winning attraction is a reconstruction of a typical Shropshire town at the beginning of the 20th century built around historic monuments.

Work set to be carried out as a result of the funding will include:

He also acknowledged that the region hosts some of the UK’s most important historical sites, particularly with regard to the industrial revolution.

He said: “As the beating heart of the Industrial Revolution, Ironbridge Gorge was pivotal to the economic development which secured Britain’s role on the world stage.

“This world heritage site draws in thousands of visitors every year.

“We are providing more than £1 million to preserve its heritage, make it more accessible, and ensure that it continues to be an important visitor destination powering the local economy.

“The West Midlands is a cultural powerhouse. We want it to stay that way for generations to come – and to make sure even more people have the opportunity to benefit from it in the meantime. That is why today we’re announcing almost £7 million in funding to be shared across five of the region’s most cherished organisations.

The largest beneficiary in the region is Birmingham Museum and Art Gallery which is being given just under £5 million.

Elsewhere, libraries in the Black Country and Worcestershire will benefit from grants and the Museum of Cannock Chase is also included.

The minister added: “The money is part of our plans to level up access to arts and culture – by investing in libraries, museums, galleries, and other cultural venues on people’s doorsteps – to make them more accessible, to protect them for future generations, and to spur economic growth.

“Today’s funding will give people better access to revamped museums and galleries.”

The funding follows £120 million for the West Midlands from the Culture Recovery Fund which helped thousands of organisations survive the pandemic, and a share of the £75 million boost from redistributed Arts Council England funding to increase access to arts and culture across the region.