An historic town centre pub is “unrecognisable” after a £500,000 revamp. 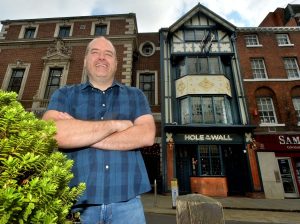 The Hole In The Wall in Shoplatch, Shrewsbury, closed at the end of August, and builders have been working away to give the town centre pub a fresh look. Bosses hope the refurbishment, and a selection of new offers including two-for-one pizzas on Tuesdays, will encourage Salopians to visit.

Dark and dull decor has been replaced with a brighter, contemporary feel, while original features have been maintained.

Staff have been in this week for training and to get used to their new surroundings, and were in for a shock when they saw the work that had been done.

Manager Rob Hynes said: “It’s completely different. You won’t recognise it when you come in. There’s new furniture and greenery. The hole has been revamped as well with new seating and a massive TV.

“They’ve kept all the wooden beams and the stone walls. The walls have been tidied up and are looking a lot better. All of the original features are still there.

“It’s a lot brighter. There is wooden flooring throughout. Part of the bar is wooden and part of it is tiled.”

He added: “We’ve been doing training all week. The first time the staff saw it was on Monday. They are all amazed at how different it looks.

“I’m really happy with it. It’s a really good refurbishment.”

According to Historic Hostelries, it used to be two pubs, the Market Vaults and the old Hole In The Wall. It is also on the site of a much older hostelry, the Gullet Inn, which was mentioned in accounts for the town as early as 1527. For almost two hundred years it was the favourite lodgings for travelling performers, and in 1630 there is also mention of the inn having its own indoor tennis court for real tennis as played by Henry VIII.

The main entrance that faces Shoplatch and runs into the Gullet Passage has the date of 1863 embellished across the front of the building. It was first recorded as the Market House in 1868 the year before Shrewsbury’s new general market was opened on the opposite side of the road.

It has also been called the Market or the Market Vaults but to the locals it was also known as the Blood Tub. There has been some speculation about the origin of the name, with some believing that it referred to the colour and texture of the beer, while others thought that it was once a good place for a brawl.

Popular assistant manager Lucy Williams has recently rejoined the pub. She has an interest in its history and often shares her knowledge with inquisitive visitors.

Following the revamp the pub is running two-for-one pizzas on Tuesdays, a quiz night on Wednesdays, open mic on Thursdays and entertainment on Friday and Saturday nights. On Saturdays there will be a band or a DJ.

The bar officially opens on Thursday, September 15, but a launch party is being held next Thursday, September 22. The Jo Baldwin Project, a popular Birmingham-based covers band, will be playing their first gig in the town. People interested in going are advised to book in advance as it expected to be busy.