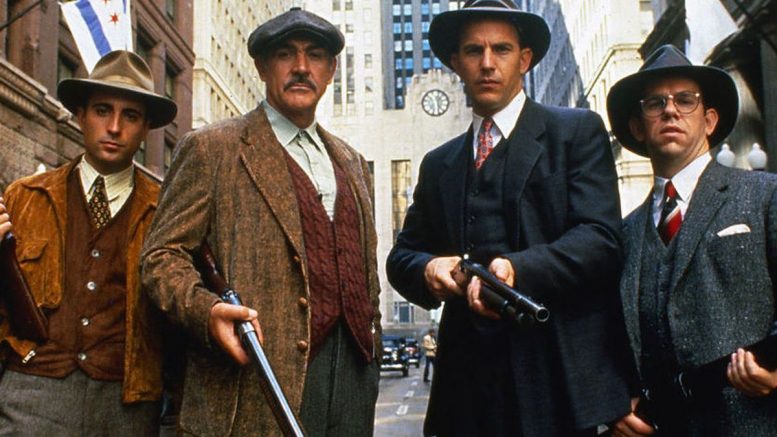 Based on the 1957 book of the same name, The Untouchables is a thrill-ride from start to finish, capturing with magnificence the often shocking world of Chicago in 1930, when the notorious Capone was at the height of his power.

The Untouchables began production in Chicago in the summer of 1986, using actual historical Chicago locations as its backdrop. To prepare for his portrayal of Capone, De Niro conducted in-depth research including watching historical footage of the man himself. He also committed to gaining 30 pounds to physically capture the role, as – according to De Palma – he was concerned about the shape of his face for the part.

With the pieces set with a strong script and some of the finest acting talent of the day, expectations were high for The Untouchables. But would it go on to meet them?

Young prohibition agent Eliot Ness arrives in Chicago and is determined to take down Al Capone, but he soon learns that task is not going to be easy. An almost omnipotent gangster, Capone has the police on his payroll and the city in his pocket, and there is no-one – it seems – that the vicious kingpin cannot buy.

Ness however meets veteran patrol cop Jimmy Malone (Connery), probably the most honourable man on the force. Encouraged by his unshakable principles, Ness asks Malone to help him get Capone, but Malone warns him that if he goes after Capone, he is declaring war.

To help them on their mission to bring the crime lord to justice, Ness and Malone recruit fresh – and so far uncorrupted – police cadet George Stone (Garcia) and treasury agent Oscar Wallace (Smith), an accountant, who soon comes up with a cunning plan to bring Capone down.

However, as Ness and his ‘Untouchables’ begin to gather a reputation for bringing other bootleggers and criminals to justice, Capone soon gets them in his sight, and the success of their mission may not come without cost…

Released in the summer of 1987, The Untouchables grossed $106.2 million worldwide and received a plethora of positive reviews. Nominated for four Academy Awards, it saw Sean Connery pick up the Oscar for Best Supporting Actor, and is widely recognised as one of the greatest films of its decade.

With superb performances from not only Connery, but also Costner, Garcia, and a superb turn from De Niro, The Untouchables is a piece of cinematic joy that can be revisited over and over again.

Historians would, quite rightly, poke serious holes in its alignment with historical accuracy. But as a piece of filmmaking that provides both an edge-of-your-seat drama as well as at least a window into an important area of the past that should not be forgotten, this flick is outstanding.

A brilliant blend of casting, storytelling and directorial vision, this one will keep its place on the pedestal for many years to come.