Giant sculptures in the centre of Shrewsbury are staying for an extra month after proving so popular over the summer. 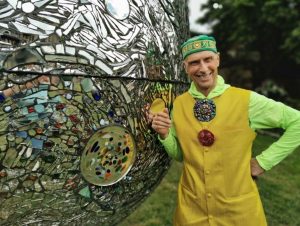 The “jaw-dropping” sculptures by world-renowned artist Andrew Logan have been part of the Shrewsbury Arts Trail, which has been a huge success.

Jonathan Soden, of The Soden Collection and a member of the Shrewsbury BID board, said the arts trail had really put the town on the map.

“The organisers should be really proud of attracting such a stellar line-up of artists to Shrewsbury,” he said.

“The exhibition at Shrewsbury Museum and Art Gallery included pieces from the likes of Banksy and Andy Warhol, along with an original Turner painting which was discovered in the museum’s archives.

“Shrewsbury BID was pleased to work with Andrew Logan to bring his jaw-dropping sculptures to the town centre, which have provoked an amazing reaction.

“They have been so popular, we are delighted to announce that the Cosmic Egg and Excalibur will be staying with us even after the Arts Trail comes to an end later in August, and will be here until the end of September.”

Andrew Logan, whose work is hugely popular across the world, said he was pleased to have his sculptures on display in Shrewsbury.

He said: “I’m very honoured to show my sculptures in Shrewsbury to explain my message of joy and delighted that the sculptures have been so popular. I’m very pleased to loan Excalibur and The Cosmic Egg for another month.”

The Shrewsbury Arts Trail, organised by Jess Richards of Shrewsbury Arts and Crafts, has brought a variety of events to the town centre, including a children’s treasure hunt and a secret art sale at The Soden Collection to raise money for charity.