A woman whose unfortunate dog was rescued from the River Severn by four good Samaritans wants to sing the praises of his teenage saviours. 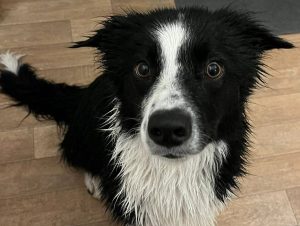 Laura Jones and her fun-loving Collie Mono were running by the river through Shrewsbury as they do regularly last Thursday evening, when Mono was suddenly taken by the sight of some ducks near the English Bridge.

Mono, who is 18 months old, got carried away diving in after the ducks and when he tried to get back out of the river, the steep concrete rise proved impossible to climb.

Laura, 40, said: “We ran from home across the Quarry, towards the weir. It’s our usual route.

“He saw the ducks and he ‘gracefully’ went after them. Where he fell in is a big concrete drop down. There was no way he was getting around, he was scrabbling at the concrete.

“I was laying flat on my stomach on the edge trying to reach down and grab him but I couldn’t.

“It felt like forever, it was probably only 30 to 40 seconds but it felt like a hell of a lot longer.

“His little face – he looked like a drowned rat. He submerged a couple of times under the water and his little face looking at me was sheer panic.

“Soon some teenagers appeared and asked if I was alright.

“This really tall lad, who I now know is called Harry, came and laid down next to me and he just managed to get a hold and pull him up.

“If it wasn’t for them he would have died, I’m sure.

“I’m laughing now but it was very traumatic.

They were brilliant. I felt so sorry for one of the girls – she had on a lovely dress and when Mono got out he had a big shake and soaked them.”

Laura took poor Mono to her mother’s house nearby before heading home and he was provided with a large bowl of water – but he wouldn’t go near it, probably traumatised by his experience.

Happily he seems to have now made a full recovery.

“He’s a fantastic dog, he comes running with me, his recall is brilliant and he stays close by,” said Laura.

“He’s never had an issue with water, we live down by Reabrook and he’s always paddling.

“We’ve had him since he was a puppy and he’s given us a ride! He has 21 different allergies, he keeps us on our toes.

“He’s absolutely fine now – but I’ve not taken him by water again.”

Laura, who runs the cleaning company Harmony Domestic, hopes to reunite with the good Samaritans who saved her dog to thank them properly this week.