‘Fundamental issues’ with plans for a town-centre Travelodge must be addressed before it can go ahead, according to council highways officers 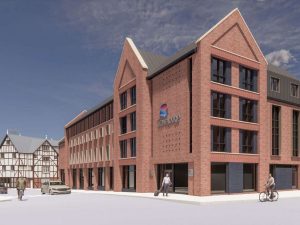 Shropshire Council’s Highways Department has had its say on the controversial proposals for hotel on Barker Street in Shrewsbury.

The plan has attracted opposition due to the design of the building proposal, and because of its proximity to one of the county’s most important historic buildings – Grade II* listed Rowley’s House and Mansion.

The scheme, proposed by Morris Property, would see a four-storey 436sq m hotel with ground-floor retail space built on the Barker Street Car Park in Shrewsbury.

The site is between the Baptist Church in Claremont Street and Rowley’s House.

The plans have been branded an “eyesore”, with calls from Historic England for a redesign.

In a letter Mark Wootton, Developing Highways Manager at Shropshire Council, says that he is not opposed to the loss of car parking that will result from the plan, but that the plan appears to be reliant on nearby Shropshire Council car parks – Bridge Street and St Austin Street.

He says it cannot be guaranteed that the car parks will remain available, with potential changes considered by Shrewsbury’s Big Town Plan.

Mr Wootton also questions the plans inclusion of a small public car park at the rear of the hotel to be accessed via Hills Lane.

He says there would be issues with the number of vehicles using Hills Lane, and questions whether it would make more sense to limit parking at the site to hotel customers only.

Mr Wootton also says the plans do not match up with the new changes made to pavements in the area.

The letter also call for clarity over setting up a taxi pick up and drop off point for the site.

He said: “Hotel locations within town and city centres are not uncommon with no customer parking provision and particularly where adjacent public car parking is available.

“This application appears to be predicated therefore that at the present time there would be adjacent public car parking availability that could provide hotel customers to park, but this cannot be guaranteed in the further in terms of how those public car parks will or could be considered as part of the Big Town Plan.”

He added: “The application includes a 29 space public car park at the rear of the site served via Hills Lane.

“It is difficult to understand the rationale to provide a small scale public car park served via a cul-de-sac both in terms of its benefit towards public car parking but also attracting the use of this car parking at times when is full and therefore resulting in an unnecessary trafficking of Hills Lane and demand on the Hill Lane traffic signals to find spaces that are not available.”

He continued: “It would seem more appropriate that on site parking were made available to the hotel and not as a public car park.

Mr Wootton’s comments also call for clarity over the size of the building and where it will sit on the site.

He said: “The alignment of the building footprint along both Barker Street and Claremont Street does not appears to follow the alignment on the footpath that has been created as part of the enhancement works that were recently completed.

“This needs to be clarified and dimensions fully shown, as it appears that the footway widths are less than currently is the case and particularly in the location adjacent to the Zebra crossing and the entry point into the hotel.”

A decision on the proposal will be taken by Shropshire Council at a later date.