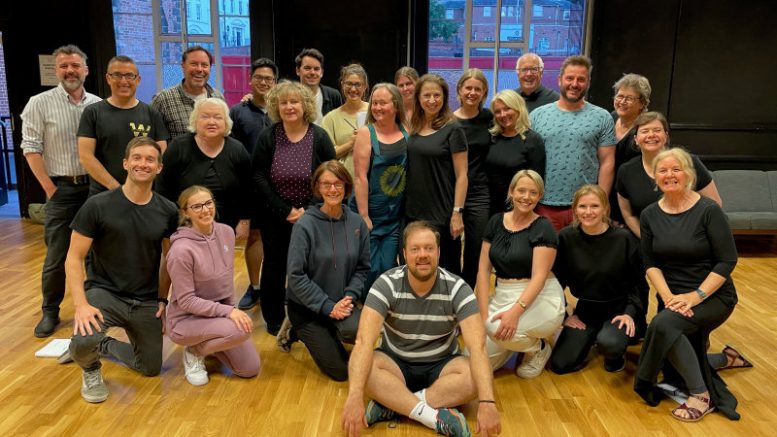 A musical theatre production of Calendar Girls opening at Shrewsbury’s Theatre Severn next week has already raised more than £2,300 for Severn Hospice.

The show is being performed by award-winning local theatre company, Get Your Wigle On and features local singing group Choir in the Shire, who are staging five performances from Friday 9 to Sunday 11 September and donating £1 from every ticket to the local charity.

Calendar Girls the Musical (written by Tim Firth and Take That’s Gary Barlow) is based on the true story of a group of ordinary women in a small Yorkshire Women’s Institute, prompted to do an extraordinary thing following the death of a much loved husband.

Blasting away all preconceptions of what it is to be in a women’s institute, they decide to produce an artistic nude calendar to raise money for charity – an act which launched a global phenomenon, a million copycat calendars, a record breaking movie, and this musical which coined the term “craughing” – the act of crying and laughing at the same time!

The show’s director and Get Your Wigle On joint founder, James Broxton, said:

“This musical is something very special. The true story of overcoming adversity and celebrating women, friendship and community touches everyone’s heart. Add in a genuinely hilarious script and of course the well-known nudity element – handled here in the best possible taste by our wonderful cast – and you’ve got a sell-out show!

“In the spirit of the original Calendar Girls, we’re donating £1 from every ticket sold to Severn Hospice to support the exceptional work they do. We’ve also been buying our costumes from Severn Hospice – it all helps.

“We’ve already sold more than 2,300 tickets, but it’s not too late to book – Theatre Severn still have some availability left with best availability for the Sunday performances. This is a show you don’t want to miss.”

Calendar Girls the Musical is showing at Theatre Severn from Friday 9 to Sunday 11 September.

Tickets are available at https://www.theatresevern.co.uk/shows/whatson/calendar-girls