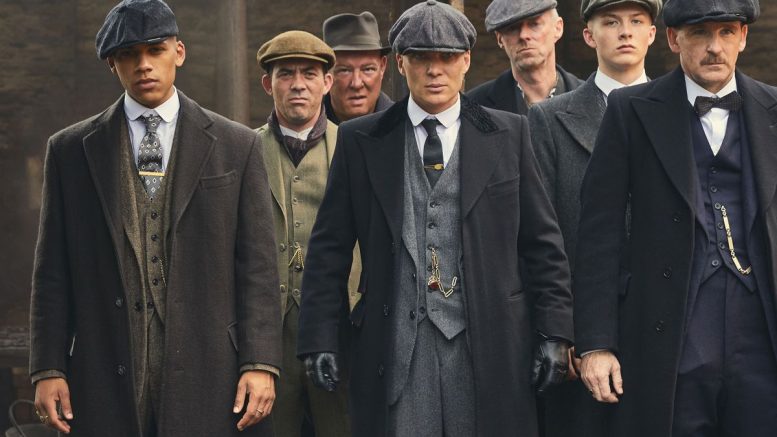 “You can always expect a lot of politics,” he said. “There’s always politics and there’s always power. And there are always constant multiple games of chess happening, especially for Tommy. A lot of the time, this breeds violence.”

Kirton has played youngest Shelby brother Finn since 2014 and the show’s second season. Only now 23 years old, the Birmingham-born actor has grown up on the set of Peaky, and has done so alongside his character.

“I’ve grown as an individual as my character has grown,” he said. “As the storyline has been written, the story has developed. Anthony Byrne [director], whom I have a lot of respect and love for, has really helped finish my journey on this sort of school of acting.

“It’s been an honour and a pleasure to just be a part of it. There will always in some ways be a part of my character somewhere in the background. I’m sure everyone feels that way – certainly Cillian must have Tommy Shelby burnt into his cranium.”

As Peaky Blinders has progressed we’ve seen Finn grow from an entirely innocent child who was almost killed in a car explosion to an ambitious Blinder who last season took his first bullet. For Kirton, who has been symbiotic with Finn for eight years, where does the line between him and his character end?

“There’s some similarities, and there’s a lot of very polar opposite characteristics,” he said. “The casting is good – it’s almost like they knew. Cillian is very much like his character in some ways, Paul [Anderson – Arthur Shelby] is very much like his character, as is everybody else. And with most actors, the only way you can fathom getting into a character in some ways is by relating to yourself. So I have to pull out parts of myself that are maybe more violent or cold.

“But Finn himself is actually – I’m sure people can see – more of the gentle one compared to everybody else. He’s a nice guy, I think. But naturally just having the blood that Finn has, he’s sharp and a force to be reckoned with when it really comes down to it. The trauma has bled down on to him but his mind’s not been twisted, and I think that shows this season.

“Growing up and becoming his own man, he’s realised that maybe this isn’t the world that he needs to fully adopt.”

As it did with everything on the planet, the pandemic hit Peakys hard, forcing production of season six to be delayed. For Kirton however, there were positives to the experience.

“It got drawn out, and I think there were pros and cons to that,” he said. “It gave me more time to wrap my head around it. You get to prep for it more.”

For Kirton, getting into the zone and absorbing himself in his character during production is important, and this season was no different. “It really is something that I personally sort of adopt. It doesn’t become everything but you do get into the world. I don’t watch other stuff, I don’t really entertain myself apart from with books and Podcasts. Your world does shift, at least for me, because the concentration is real.”

This season made for a very different filming experience for another reason – the sad death of Helen McCrory, who had played Aunt Polly since the show’s first series.

“The dynamic was definitely shifted this year,” reflected Kirton. “There’s a huge lovely female presence and I think that’s been established on and off screen. In terms of Helen herself, if I had to speak as an individual, I just think that a lot of guidance and a lot of the fabric of Peaky was built from her – in her character and just her as an entity as the lovely powerful actress that she was.”

Of his other co-stars, Kirton could not be more complimentary, and is proud to be part of a team he is sure have created something that will delight fans far and wide once again.

“It’s always a pleasure and an honour to work with my co-stars, and with new people,” he said. “There’s Emmett Scanlan – always a pleasure, never a chore with that guy. It’s so nice to act with him. There’s Conrad [Khan] who is new, and that was a very interesting dynamic.

“It’s always a pleasure to just go down that journey that is Peaky Blinders.”

This series is slated to be the drama’s final, though with a dance production and reportedly a film to follow, as Kirton relates, the journey for the Shelbys looks to be far from over.

“There is a natural end but also perhaps a beginning of some sort with this season,” he added. “Some things are put to rest but then some things are burning better than ever.”

We wait for tomorrow night’s episode with bated breath.