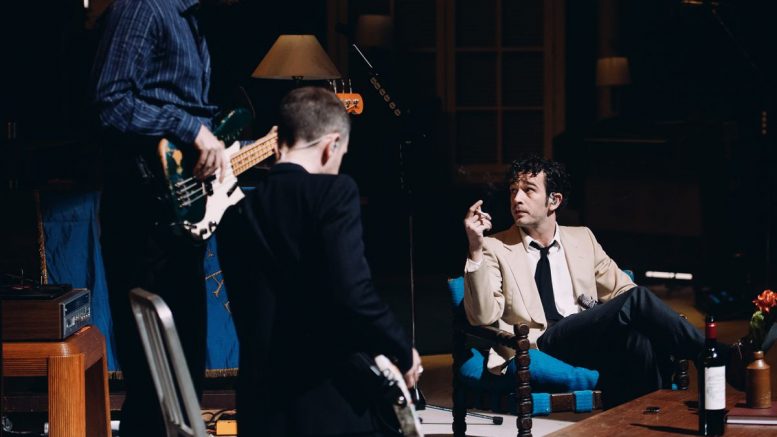 Those screams are still there at Birmingham Resorts World Arena for their ‘At Their Very Best’ tour, but as well as a younger crowd, the original screams have more of a slightly mature tone, and those girls now probably have careers and a family.

The 1975 have matured too, after five albums, they still know how to belt out a pop song that will chart and get played on Radio One, hence a younger audience. They are great records, but their more experimental, slower stuff, is great too.

Arriving by train, we clearly didn’t get the brief as a lot of people heading to the gig donned a black tie and white shirt. Sure enough, frontman, Matty Healy is wearing this attire along with a beige jacket.

It’s the attention to detail with The 1975. The brand, the set, the show. The stage takes a completely different approach to their last big tour. No neon-lit rectangles, part of their old brand, no smoke and no travelators, instead the set feels like a Saturday night TV chat show, with a nod to the 70s.

It’s like a house with an upstairs and downstairs, sofas and shutters making it feel like a set from the theatre. Lead guitarist Adam Hann, bassist Ross MacDonald and drummer George Daniel enter through the front door, along with a host of other musicians. They each enter, hang their coat up, take their place and switch on a light nearby.

A spotlight shines on Healy on a sofa, swigging on a bottle of red and lighting a cigarette. He staggers over to the piano and the show starts with the first track from their latest album, Being Funny in a Foreign Language. In fact, the first half of the show is this album almost in full, mixed in with a few classics.

Feelgood tracks like Happiness and I’m in Love With You, mixed with big hitters like Oh Caroline and About You, along with slower songs like Part of the Band and All I Need to Hear, sees complex Healy very relaxed and singing sitting down, laid out on the sofa for a lot of them, still hugging that bottle of red, along with a hip flask. In fact, the first half sees him looking like he has definitely had one too many sherbets, but as he exits through a TV to go into the second half, he shrugs that persona off, as he seems to completely sober up for the second half of the show. Was it all an act?

A costume change sees the band in black with stage crew in white doctors’ coats throughout. They kick off with If You’re Too Shy (Let Me Know), and TOOTIMETOOTIMETOOTIME, which really gets the crowd going. Paris sees the biggest cheer from the crowd so far, with him singing into the mic with a bunch of roses in hand.

On to some “depressing” tracks, as Healy describes them, with Somebody Else and I Always Wanna Die. For me, keep the depressing tracks coming, they have so much emotion and intensity in their moodier stuff.

As we near the end of the night, it seems to step up a gear, with The Sound shaking the stands as the crowd jumps in unison, and a strong finish ends with Sex and Give Yourself a Try.

It wasn’t entirely clear that Healy was going to get through the second half, but instead the night just kept getting better, just like the band. Ten years on from first seeing them and they’re just as captivating as ever.