No one has had a more significant impact on cricket in Shropshire in the 20 years than Shrewsbury School’s head of cricket, Andy Barnard. 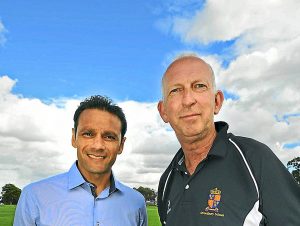 It has become the norm for the school’s cricketers to go on and have successful first-class playing careers.

Barnard and his team of coaches have produced a remarkable 11 professional players since 2002, three of whom have gone on play at the international level.

And now, after almost 20 years in the role, the 65-year-old has officially retired after the conclusion of the Silk Trophy, an annual tournament marking the end of the school’s cricket calendar.

Throughout his time at Shrewsbury, Barnard threw himself into school life. As well as being head of cricket, he was head of fives, housemaster of Port Hill and taught geography.

But his legacy is truly reflected in the number of professional cricketers the school produced while he was in charge.

The first to come through the school system was James Taylor. The former England batter left Shrewsbury in 2008, and he went on to play 34 times for England in Test matches and ODIs.

Taylor said that Barnard has done a ‘phenomenal’ job bringing through young players, and he has turned the school away from being a traditional rowing and football school.

He said: “To do it for 20 years and to consistently develop so many players shows it was not just a one-off.

“Just look at what has happened to cricket at Shrewsbury School since he has been involved.

“Creating 11 first-class cricketers when previously they did not really have any. It has turned the school from a rowing and football school into one which produces cricketers and Andy Barnard can take a lot of credit for that.”

Taylor also explained why he thinks his time at the school has been so successful.

He added: “He sets a great example to the kids.

“He knows individuals, and this is vital when you are a leader.

“You need to know people and what gets them going and also have a rapport with the players and gain their respect – he does that.

“He could be tough on us when we needed it, and he could have a laugh at the same time.”

Mentoring players did not stop when they left the school in upper sixth. Taylor shared a nice moment when Barnard and a colleague attended his Test match debut in 2012 against South Africa.

He said: “He came to my debut at Headingley. Barn was always a great champion of mine.

“I would always keep in touch with him. He was always there if I needed anything.

“He was a great mentor, it is vital to get on the right path as a young cricketer, and he was always there to help if you needed it.”

Outside of his school commitments, Barnard was pivotal to the successes of Shrewsbury Cricket Club – where he is a former player and chairman.

He has raised three boys, Mike, Steve and Ed – all have gone on to play a high level of cricket, with his youngest Ed recently signing a three-year contract with Warwickshire.

And throughout it all, he has had the support of his wife, Helen.

He joined the school in September 2003, and Paul Pridgeon was the cricket professional for the majority of Barnard’s time – until he retired in 2017.

Pridgeon played first-class cricket for Worcestershire in 70s and 80s and is now a member of the club’s board.

The pair found a great formula for producing talented young cricketers, and they formed a great friendship.

And the 68-year-old was glowing in his assessment of Barnard’s time at the school.

He said: “He has done an outstanding job. I thoroughly enjoyed working with him.

“I can be quite opinionated at times but I felt we worked well as a team. We had some great laughs.

“He is honest and thoughtful and sensitive as well.

“It is not just what he has done for the cricket at Shrewsbury School, it is for cricket throughout Shropshire.

“He has practically dragged Shrewsbury CC up through the leagues into the Birmingham League and the only job he has not done there is groundsman.

“His man-management skills for running the cricket, but also being a housemaster and multi-tasking were incredible.

“He deserves his break.”

Barnard won lots of silverware during his time at Shrewsbury including the Lord’s Taverners Colts Trophy, HMC U18 T20 title and the Silk Trophy on several occasions.

Will Hughes will fill the vacant head of cricket position in 2022, with coaches Adam Shantry and David Manning at his disposal.

Hughes is another long-term servant of the school. He joined the teaching staff in 2004.