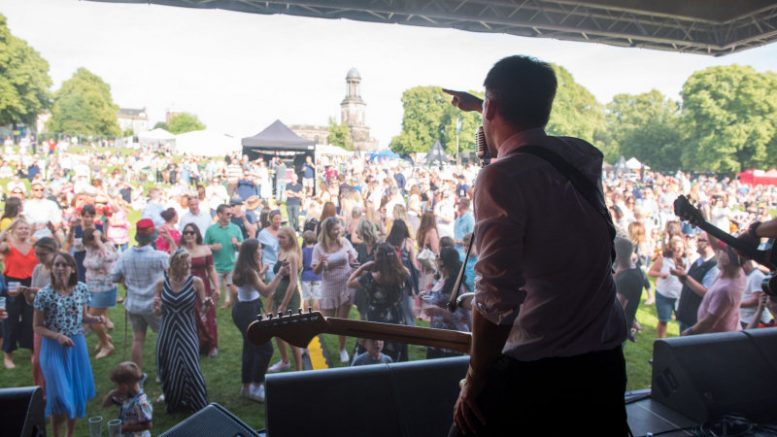 A brand-new party festival comes to Shrewsbury on 20th and 21st May in the town’s Quarry.

The team at Shropshire Festivals are bringing together local brewers, drinks producers, tasty street food, the best bands in the region and a host of fun for their new festival.

Beth Heath, Director of Fun said, “This event will mix all the most loved elements of Shropshire Oktoberfest with sunshine and outdoor fun, having a great time with friends in the beautiful parkland of the Quarry, and partying until the sun goes down. Ticket sales have been going crazy – make sure you snap up yours! Early bird tickets are on sale now.”

After bringing down the house at Shropshire Oktoberfest, The Old Time Sailors have been booked to play their 19th century style upbeat bluegrass and folk, which transports the audience to another world with their eclectic mix of instruments and sounds.

There will be a silent disco tent, letting you choose your own tracks to dance to, or you can live out your rock star fantasies with ‘Jamaoke’ – a cross between ‘guitar hero’ and karaoke, where you can play instruments in a band performance. There will be lots of fun antics on offer, including a bungee run, axe throwing, human table football, volley ball and a rodeo bull.

On Saturday 21st, festival goers can enjoy a selection of top comics from the circuit.

Compering and performing is Mrs. Barbara Nice – a much-loved headline act throughout Britain, as seen on Britain’s Got Talent, Coronation Street, That Peter Kay Thing, Phoenix Nights, Max and Paddy’s Road To Nowhere, amongst others. She will be joined by guitar-playing stand up Silky, North-West comedian

There will be dazzling belly dancing, amazing hula hooping, line dancing and performances from Get Your Wigle On.

CAMRA (Campaign for Real Ale) will be running a bar with all their favourite cask ales and top recommendations.

Shropshire Festival’s charity of the year is Lingen Davies Cancer Fund. Representatives from the charity will be at the event providing a flower crown making workshop to raise funds.

Tickets can be purchased from www.shropshirepartyatthepark.co.uk.

Festival of fun planned for the Jubilee in Southwater