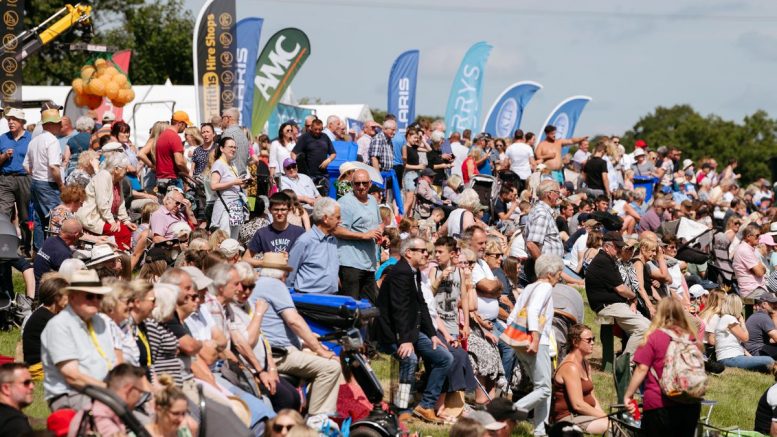 Town met country at the Oswestry Showground for the first time in three years on Saturday with huge crowds lining the avenues and the main ring throughout the day.

Visitors came from not only the local area but across Shropshire, Cheshire and Mid and North Wales.

And while the agricultural competitions and trade stands were still at the forefront of the day, visitors were delighted with the huge range of activities and entertainment for all ages on offer.

Mayor, Councillor Jay Moore, said it was his first visit to the event and he had not realised just how many attractions there would be.

“There is so much here to see and for those not from a farming background the agricultural side is really interesting. I am incredibly impressed and after a hiatus because of Covid, it is great to see so many people.”

“Farmers are the custodians of our land and its wonderful to see agriculture and community come together at the show,” he said. “It is an honour to be president.”

The crowds were praised by vice-chairman David Kempster.

“Numbers here today are superb. After the Covid break we were not sure whether we would get people to return – they have done us proud.”

He and chairman, Janet Ward, thanks all the volunteers who give up hundreds of hours to get the showground ready, to be on the site during the event and help dismantle everything at the end.

Joining the long queue from an ice-cream from the made-on-the-farm Gelato experts, Brooklands Dairies, were Stacey and Lloyd Phillips and two-year-old son, Arthur, from Whixall.

“It’s been such a good day,” Stacey said.

“Arthur loves the tractors and it’s nice to be back at a big event again.”

Agricultural vehicles ranged from the huge modern machines in the trade aisles to the vintage tractors which did a lap of the main ring.

For three-year-old Marley Hughes from Oswestry, it was the first time he had been so close to cattle and he was fascinated.

His mum Katie said it while Marley loved the animals, twin sisters, 18-month-old Daisy and Rosie, were a little scared.

“It is so nice to be able to come to the show and see the animals up close,” she said.

As well as the livestock the show also held its usual horticultural classes. Despite the hot, dry summer gardeners produced stunning exhibits.

Winner of the basket of vegetables was Andrew Jones from Llanymynech, no stranger to the world of shows. He first took up gardening in 1991 and now has a greenhouse and polytunnels to produce his prize crops.

Second place in the category was Dave Perry from Worthen who will be on the other side of the show world a judge at the Shrewsbury Flower Show on Friday.

“It has been too hot for growing this season,” he said.

Main ring entertainment was provided by the Imps Motorcycle display team, Nick Gregory and with his Misselchalke Gundogs team, and Ye Olde Retail Falconry Display Team with its Hawks, Falcons, Owls and Vultures.