Second World War grenades that were found on land where new homes are being built could have been stored away by the Home Guard. 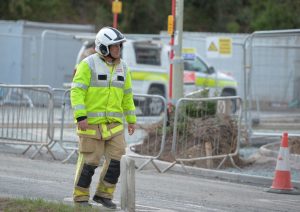 Bomb disposal experts were called in homes were evacuated at Minsterley Road, Pontesbury, near Shrewsbury, last Thursday after 24 devices were unearthed.

Police put a 100m cordon in place and told residents to shut their windows and doors as Explosive Ordnance Disposal (EOD) experts inspected the finds.

The grenades were destroyed in controlled explosions on Thursday and Friday. Now Shropshire Homes, the house building firm which has planning permission for 38 homes on the site, have stopped work to survey the land, just in case any more munitions are found.

A spokeswoman for the company said: “Shropshire Homes unearthed incendiary devices at their site at Minsterley Road, Pontesbury, on Thursday 25th August. One of the devices was disturbed by an excavator and this resulted in a small fire.

“Emergency services were called and the site was evacuated. Bomb disposal experts identified a total of 18 intact devices and a further six that had been damaged. All were destroyed with a controlled explosion. In the meantime all construction activities have been stopped and a specialist contractor will survey the development before works re-commence.

“It appears likely that the devices were incendiary grenades based on white phosphorus which were used during World War Two. We are not aware of the site having any previous military use and it may be that the grenades had been stored away from the village by the Home Guard.

“Shropshire Homes would like to thank the emergency services for their quick and effective response to the situation.”

The drama was a cause for concern for residents last week.

Michael Dodd, who lives opposite the site where the munitions were found, said police knocked on his door and told him to evacuate. He chose to stay put, but said: “It’s unnerving. How does a bomb get into Pontesbury?”

The 80-year-old retired law cost draftsman, who has lived in Minsterley Road for around 30 years and Pontesbury for around 50, added: “There was a kerfuffle going earlier on. I didn’t think too much of it but later on a copper knocked on my door and said I’m in the exclusion zone. He advised me to leave, but I didn’t. I shut my windows and doors. Some people did go.

“As far as I know nothing like this has happened here before. I rang a few friends to let them know what was happening.”

West Mercia Police inspector Nick Horton said: “We received a call from the workers here working on the new build site. They were doing some preparatory ground works and uncovered what they believed to be some form of munitions, potentially from World War Two.

“As a result of that we’ve arrived along with our partners in the fire and rescue service and as a precaution we put a 100m cordon on until we could ascertain exactly what it was we’re dealing with.

“I’d first like to thank everyone from the local community who helped us put that cordon on, obviously which is to help them, which is fabulous.

“Going beyond that we’ve asked for EOD to come along with the MOD. They have ascertained what it is we’re dealing with and it is, in fact, munitions from World War Two.

“They have two or three of these incidents weekly, nationally, so there’s probably 150 of these things going on every year up and down the country. So it’s nothing unusual and I want to stress, despite some rumours, there’s nothing untoward happening here. It’s almost business as usual for the EOD.”