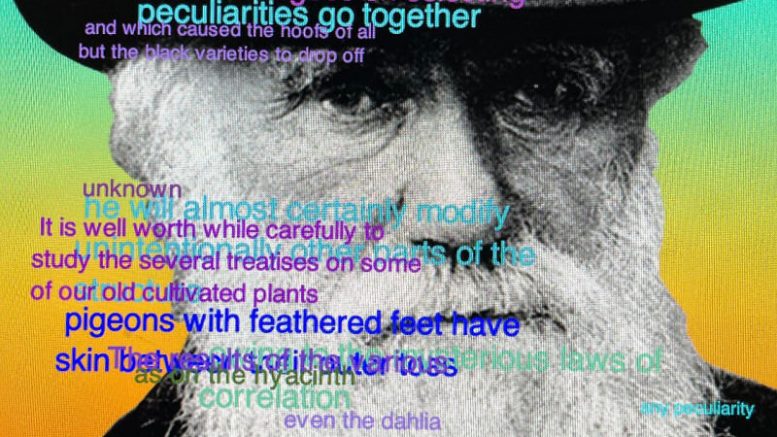 Charles Darwin will be put, quite literally, in the spotlight thanks to a light show in Shrewsbury to mark the great man’s birthday.

It’s part of a visual extravaganza put together by light artist Andy McKeown and backed by Shrewsbury BID (Business Improvement District) in which the spectacular creations are lighting up the Market Hall each evening.

People have been able to see Andy’s changing display over the first four days of this week marking the Queen’s accession to the throne on February 6, 1952.

Now, on Thursday and Friday, the focus switches to Darwin – Shrewsbury’s most famous son.

Kate Gittins, Shrewsbury Market Hall manager, said: “Andy’s amazing display has already caught the imagination of the public and we were delighted to provide the canvas, as it were, to host the changing display in lights of stamps issued during the Queen’s 70-year reign.

“Thursday and Friday, Andy’s light show will feature text of Darwin’s The Origin of Species scrolling down the Market Hall and then on Saturday, Darwin’s birthday, the display will feature an image of an Andy Warhol-inspired picture of the world-famous naturalist.

“These light shows are proving extremely popular and have been a great way to brighten up the town during the winter which followed the colourful displays and festive excitement over Christmas.”

Emma Molyneux, of Shrewsbury BID, said: “We have been fortunate to see various light displays projected onto buildings in Shrewsbury before and they are always really effective.

“The latest one, which started on Sunday, is particularly poignant because it has marked the 70th anniversary of the accession and the focus will now move onto Darwin – something which dovetails nicely with the ongoing DarwIN Shrewsbury Festival in the town.

“It doesn’t end there, either. On Monday there will be one final evening’s light show when Andy lights up the Market Hall again with his very special animated card to mark Valentine’s Day.

“It’s been a thrilling light show and Shrewsbury BID have been delighted to get behind it by supporting Andy’s artistic efforts. It’s something we are really keen to support, it makes for a real talking point and we’ve had some really positive feedback.”

Attingham to set the stage for outdoor theatre production