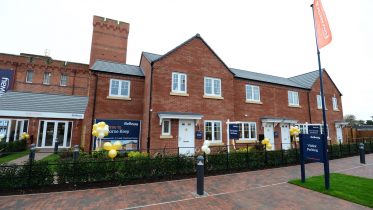 Work is progressing well at a former army barracks in Shrewsbury where a new community is now forming.

Bellway West Midlands is transforming the historic Copthorne Barracks site off Copthorne Road into a new residential neighbourhood, with the first selection of homes now built and the first 18 households now moved in. A further 12 homes have been reserved.

Of the 215 homes being constructed at Copthorne Keep, 170 are to be sold privately while 45 will be provided as affordable housing for local people.

The former barracks were built between 1877 and 1881 and soon became the headquarters for the King’s Shropshire Light Infantry, later becoming the regional centre for the Light Infantry Brigade Depot in 1960. The site was sold by the Ministry of Defence to Bellway in 2018 with planning permission for the new homes gained later that year.

As part of its plans for the development, Bellway is preserving part of the original 19th century Keep, which is being converted into apartments. These unique homes will be released for sale as the development nears completion.

Marie Richards, Sales Director for Bellway West Midlands, said: “Despite the challenges of the past year due to the coronavirus pandemic, we have still seen considerable success at Copthorne Keep.

“With construction progressing well, we have now started work on the homes at the centre of the development. This collection of homes, which will include a selection of larger four-bedroom properties, will look out on to the green space and park area located at the heart of the development.”

“So far we have seen a real mix of buyers find their ideal homes at Copthorne Keep, with downsizers, families and first-time buyers all reserving properties at the development. The wide variety of house types available here means there’s something for everyone.

“People have also been attracted by the proximity of Shrewsbury’s historic and attractive town centre, offering an eclectic mix of independent shops, restaurants and cultural attractions within walking distance.

“Two showhomes have opened on site, where visitors can get a glimpse of what their future home could look like at the development. One-to-one appointments can be made for prospective buyers to visit the development and the showhomes and ask the sales staff any questions they might have.”

The two showhomes at Copthorne Keep are the three-bedroom Stockton and two-bedroom Almond house types.

There’s currently a choice of three and four-bedroom houses available to reserve at the development, with prices starting from £261,500.