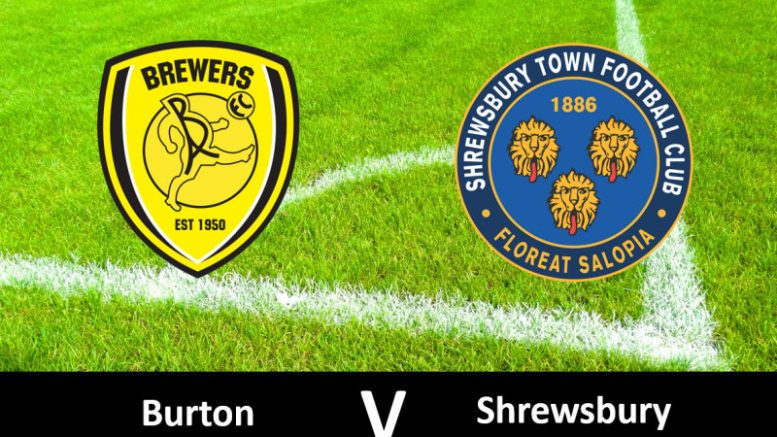 Shrewsbury Town are back in action on Tuesday night as they face a Burton Albion side who have enjoyed an excellent recent run of form.

The Brewers turned to former Chelsea and Leeds striker Jimmy Floyd Hasselbaink for his ‘second coming’ at the Pirelli stadium. The Dutchman was hired on New Year’s Day and since then Burton has accrued 28 points out of a possible 42 – boosting chances of survival.

Burton signed seven players to help them with their relegation battle – including the capture of former Wolves and Chelsea defender Michael Mancienne. Comparisons have been drawn between Burton and Town – with both sides changing their managers midway through the campaign and achieving remarkable results.

Town will go to the Pirelli Stadium potentially without Brad Walker. The midfielder only recently came back from a three-month lay-off with an ankle problem, but limped off after 30 minutes during the weekend’s 1-1 draw with Hull. The club await results of a scan.

Goalkeeper Matija Sarkic is away with the Montenegro national team. The Wolves loanee will look to feature in his nations World Cup qualifiers against Latvia, Gibraltar, and Norway. If selected for the latter, Sarkic could square off against the world’s hottest property in Erling Haaland. The Borussia Dortmund striker has notched 12 Champions League goals in eight appearances, and 49 goals in as many games.

With Sarkic away on international duty, Harry Burgoyne will be looking to stake a claim for a regular starting berth. Youngster Bevan is likely to be called up to the bench to provide cover. Sean Goss, Curtis Main, and Harry Chapman are pushing for recalls.

Town have won only one of their previous six visits to Burton. That came in January 2016 when Andy Mangan and Shaun Whalley were on target in a 2-1 win.

Burton will hope to have Michael Bostwick back in the heart of defence after he missed the last three games with an unspecified injury. Winger Danny Rowe is a doubt with a hamstring issue.

The home side, who lost 2-1 to MK Dons at the weekend, currently occupy 18th place in League One.

Other League One Fixtures